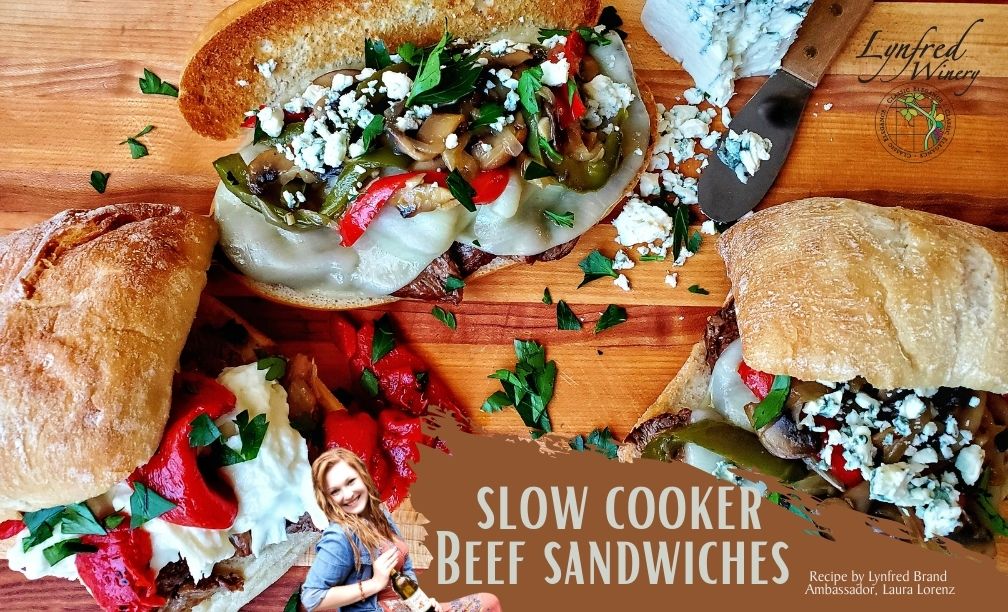 Directions
In a large pan (I use a cast iron Dutch oven) add the vegetable oil to coat the bottom of the pan
(roughly 2 T). Heat the oil over high heat; once the oil is screaming hot, add the roast. Sear the
meat on all sides (about 3 minutes per side) *. Once fully browned remove from the pan and set
aside. Next, add the rest of the ingredients to a crockpot and stir well. Place the meat in the
crockpot (turn the meat over in the juices to ensure it is fully coated), cover and cook on low for
4 hours. Then remove the meat and slice (against the grain) and then place back into the
crockpot, cover and cook an additional 2 hours on low.

How to serve
* There are 2 ways to serve these sandwiches, both equally delicious.
1.) Lightly butter a hoagie roll, place desired amount of sliced meat on one side, cover with
provolone and crumbled blue cheese. Place under the broiler until the cheese is melted.
Remove from the oven and spoon on a mixture of caramelized bell peppers, onions, and
mushrooms* and a sprinkle of fresh parsley. Serve the sandwiches with a side of au jus
(the amazing liquid left in the crockpot) *.
2.) Lightly butter a ciabatta roll, place under the broiler until lightly toasted. Next, add the
sliced meat, torn fresh mozzarella, a few roasted red pepper slices (jarred is fine),
and a sprinkle of fresh parsley (basil is also delicious).
Enjoy!

TIPS
*All the alcohol does cook out but if you still do not want to use beer, you can substitute regular coke
(not diet).
*Taste the meat after cooking and either add salt directly to the crockpot or on each individual sandwich to taste. The reason the salt is not measured is because all beef broths can range in level of saltiness.
*When searing meat, a great way to tell when to flip over to the next side is whether the meat
releases from the pan. If it’s sticking at all, it’s not ready to flip.
*For the caramelized vegetable mixture-I like to cook my sliced onions, sliced bell peppers (red and green are my favorite combo), and sliced mushrooms (button and baby portabellas work great) with olive oil, a little butter, and a little chopped garlic until nice and brown. Here’s a trick-don’t salt the mixture until it’s almost done cooking; salting too early can make the mushrooms release too much water and increase cooking time. For my mixture, I used 2 bell peppers, 1 large, sweet onion, and about 15oz of mushrooms with 2 cloves of garlic. This is personal preference; use the amounts you like; for instance, maybe you don’t like mushrooms so omit and use more bell peppers.
*Au jus-I just spoon a little liquid out of the crockpot and place in a small ramekin for dipping. If you want to go the extra mile, you can strain, skim off the fat and reduce it on the stove. Both ways are delicious, just personal preference.
*Both sandwiches are great! See which one is your favorite!